When the beginning of the school year began for the 2020 seniors; nobody would have predicted what would have happened in the World much less the United States.  Not only did the economy coming to a screeching halt but high school students would have their lives turned upside down as well.  Distance learning would become the norm, cancellations of prom and unorthodox graduations would be planned.  The high school senior would soon learn that nothing is guaranteed in life and no matter how much you prepare for the uncertainty; everything can be taken away in an instant.

The Class of 2020 doesn’t know a world without 9/11 as it is a historical event rather than something they lived through.  A Texan occupied the White House when they were born and they were only 6 years old when the first Black American was elected to the highest position in America.  They are younger than the iPod, which was released in 2001 and only 5 years old when the first iPhone was released.  YouTube launched while they were 3 years old and SpongeBob SquarePants is older than all of the 2020 seniors as is the video game series Halo.  “Call of Duty” video game came out when they were a year old.  MySpace had launched when they were one and they had just turned 2 by the time Facebook was created.  When they were 4 years old, Twitter became a mainstay in social media.  They have participated in viral challenges like the Harlem Shake and Ice Bucket Challenge.  Popular communication methods are “Texting” and “Snapping” friends.  Pew Research is classifying the high school class of 2020 as post-millennials or Gen Z. 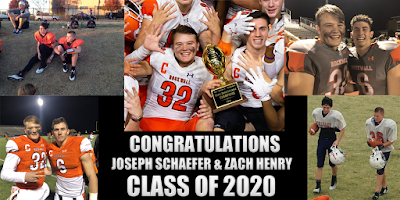 In addition to helping businesses navigate the current economic climate providing strategies for companies to reach a larger market share through digital media platforms, DeliveryMaxx would also like to congratulate the sons of James Schaefer and Mark Henry.  James is the Founder of DeliveryMaxx and Mark is the Business Development Director.  Both of their sons, graduating high school seniors, Joseph Schaefer and Zach Henry were Captains for this year’s Rockwall Yellow Jackets State Semifinalist Football Team.  They have been teammates of each other since the 6th grade. 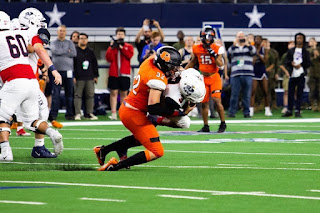 Joseph is graduating in the top 5% of his class and will be attending Wesleyan University in Connecticut this fall.  He will be playing football for the Cardinals and majoring in Economics.  While in high school, Joseph was the inaugural President for the Young Men’s Service League and a member of the National Honor Society as well as being selected to serve on the Student Leadership Council.  He was a 2 year letterman for the Yellow Jackets Football Team earning All-District Honors as a Junior, and 1st Team All-District as well as 1st Team Academic All-State as a senior.  In November Joseph was named Jacket Athlete of the Month  having 25 tackles, 3 TFL, 2 sacks, 2 fumble recoveries, 1 Pass Break-up in three Rockwall playoff victories for the month of November in 2019.  Head Coach Rodney Webb shared, “Joseph has led our defense late in the season in addition to leading the entire team as a senior captain.  Joseph Schaefer has epitomized the meaning of JFND (Jacket Fight Never Dies) in our three playoff victories this November.”  Playing linebacker, Joseph finished his senior season tied for 3rd in Most Tackles in a Single Season in Rockwall History for the 2019-2020 year. 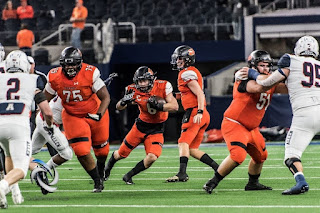 Zach will be attending the University of Texas in Arlington this coming fall.  He will be playing baseball for the Mavericks and majoring in Business and Sports Medicine.  During high school, Zach was a member of Student Council and PALS. He was a 3-year letterman in both baseball and football for the 6-A program which competes on the largest stage of high school sports.  He earned 2nd Team All- District as a Junior and 1st Team All-District his Senior Year at the Running Back position.  In three years he racked up 2932 yards and 39 touchdowns.  In November of 2018 he was named Jacket Athlete of the Month rushing for 311 yards and scored 6 total touchdowns in three November football games for the Jackets.  Zach's 118 yards rushing is the most allowed by a single player versus Allen in 2018.  The next highest total was 109 yards by EJ Smith of Jesuit - the son of Emmitt Smith.  “Zach Henry was an offensive catalyst for our great month of November, in which our offense averaged 44 points per game” stated, Coach Rodney Webb.  For baseball he earned 2nd Team All-District as a sophomore.  His Junior Year he was named 1st Team All-District, 1st Team All-State as an Outfielder and Offensive Player of the Year.  He would also be named Dallas Morning News Player of the Week.

Both boys attended Rockwall Schools from elementary through high school.  After playing against each other for several years in baseball and football in various select leagues; they became members of the same Select All-Star Team in football traveling to Oklahoma for the National Showcase Competition.  Zach would play quarterback while Joseph shored up the defense at linebacker.  Both boys would take their talents to Williams Middle School for 7th and 8th grade before entering Rockwall High School.  They each played on the 9th Grade A-Team as starters before making their way to Varsity their sophomore year (Zach at the beginning of the season and Joseph for playoffs).  The boys would end up helping the Jackets Football Program collect a total of 6 playoff wins (3 Bi-District, 1 Area, 1 Regionals, and 1 Quarterfinals Championships). They would finish their high school football career leading the Jackets to the Texas 6A High School Football State Semi-Finals for the first time since 1988 against a loaded Duncanville Panthers team falling one game short to have the chance to play for a State Championship.  Their win against perennial power house Allan High School was recently voted as one of the Top Games of the Decade by 24/7 Sports.  Both Zach and Joseph made some key plays in the game to secure the victory.

Bruce Springsteen released the song, “Glory Days” in 1984.  The song is a seriocomic tale of a man who now ruefully looks back on his so-called "glory days" and those of people he knew during high school.  However, this isn’t the case for these two.  Zach will have a chance to continue his baseball career at UTA in the Sun Belt Conference while Joseph will continue in football for Wesleyan University in the New England Small College Athletic Conference.  Each player is on scholarship and will get to add to their accolades maybe inspiring another artist to write about high school kids that faced challenges head-on and accomplished remarkable things in life.

James and Mark have a lot to be proud of by leading DeliveryMaxx into one of the most innovative digital media companies in the country… especially in today’s economic climate.  However, they will be the first to tell you that they are filled with excitement about their boys’ accomplishments and the bright future each of them have.  Joseph and Zach will conclude their senior year by participating in the graduation ceremonies for Rockwall High School that will be held at Globe Life Field in Arlington, Texas Tuesday, June 9, 2020 at 7 PM.

Congratulations to all of the 2020 High School and College Seniors!  You are the future, and we look forward to seeing all of the great things you will do in the years to come.