Your business must have a social media presence.  This is a statement that would be truthfully stated at any point in the past 10+ years.  However, now it is especially important.  The past two months have upheaved business plans and many small business owners are deeply concerned for the future of their livelihoods.

Across most states, we are seeing lockdowns & restrictions being lifted.  Unfortunately, that does not mean the rocky path businesses have been placed on are at an end, rather further obstacles lay ahead.  And now is not the time to lose hope, I am reminded of the Myth of Orpheus & Eurydice. 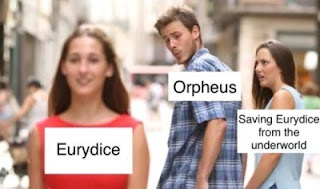 For those unfamiliar, Orpheus is a legendary musician & poet in Ancient Greece.  He created music that was said to charm all living things.  His music was so beautiful that even trees would dance and are said to be frozen in their last dance to this day.  Most famously, his young wife Eurydice tragically died after falling into a nest of vipers on their wedding day, and not content to lose his beloved Orpheus traveled to the underworld to retrieve her.

The journey was hard, and when he reached the hellish underworld he played his music so powerfully that Sisyphus rested on his rock, all 3 heads of the dog Cerberus were enchanted by the tunes, and the lords of the Underworld Hades & Persephone agreed that Orpheus could return to the world with his wife Eurydice.  However, there was one condition.  Eurydice was to follow behind Orpheus and he would not be permitted to turn back to see her until they reached the end of the difficult paths & caves out of the Underworld.  Only when they reached the very end and into the light of the world could Orpheus turn to see Eurydice.  Thus, they began the difficult trek out of the underworld, leaping across chasms, up steep cliffs, and through narrow caves.  At last, a few mere feet from the end Orpheus suddenly stopped and turned to gaze into his wife’s eyes.  When he did, she was pulled back by invisible hands to spend her eternity in the underworld.

Many argue what could have compelled Orpheus to stop so close to his goal, but none can answer the question.  Perhaps it attests to the human nature just when it seems like success is at hand, the toughest part is behind us and all that is left is a little obstacle, trivial and insignificant to be overcome, that is the moment when we are tempted to lose our minds and undo everything we have done.  Orpheus represents all our missed opportunities, loves, friendships, and successes we have let slip through our fingers. 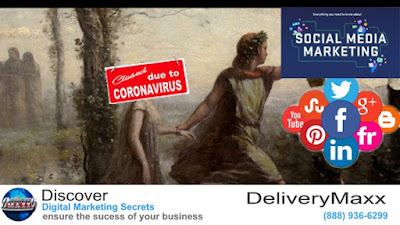 Similarly, for businesses, the toughest trail is behind us.  The few feet of adaptations that lay ahead might seem like obstacles that are unfairly placed and cannot be overcome, especially to those unfamiliar with utilizing online sales & social media marketing.  Fret not, DeliveryMaxx is here to help, whether you need to transition to an online store, increase your social presence, send follow-up to retain your existing customers, or any combination we have programs that are fully customizable for your individual needs.  Visit us online at www.deliverymaxx.com or call (888) 938-6299 today!